Borneo – Uncovering life in the canopy

Borneo, in Southeast Asia, is the third largest island in the world and is shared by three countries; Indonesia, Brunei and Malaysia. Not so long ago it was covered with lush tropical forests, teeming with wildlife. But nowadays, it’s mostly covered in palm oil plantations, a monoculture in which wildlife struggles to survive. Thankfully, the Malaysian state of Sabah in the northeast of the island remains comparatively untouched and this is where our 13-day Borneo tour took place in uncovering the photographic treasures in the Borneo jungle. Our journey began in Kota Kinabalu, affectionately known as “KK” by the locals, which boasts views onto the islands that pepper the tropical South China Sea offshore but soon commenced forth via plane to Sandakan.
After an educational experience at the Sepilok Orangutan Rehabilitation Centre and the Labuk Bay Proboscis Monkey Sanctuary, we headed out via boat to the Sukau Rainforest Lodge, which is an establishment that focuses on ecotourism experiences along the winding course of the Kinabatangan River. Orangutans are frequently encountered swinging through the trees at the edge, as well as hundreds of proboscis monkeys, a strange type of primate made famous by their enormous noses. Semi-aquatic, a proboscis monkey’s “snozzle” serves as an amplification device for its amorous mating call, a belch like song that the male emits from the top of a tree. Females are attracted to this “serenade” and if the male has a bigger than normal nose, he’ll likely get to mate with them. Among proboscis monkeys, size really does matter! From the comfort of our small boat, we saw troops of these strange, pot-bellied animals, but our favourite encounter was when we saw a whole clan of monkeys swim across the river to reach a well-endowed male on the other side. Their now “divorced” small-nose husband could do nothing but watch in dismay as his wives abandoned him in favour of his big-nosed rival.
During our Borneo tour, we also encountered the extremely rare pygmy Borneo elephant on the banks of the Kinabatangan, and were treated to the sight of a whole herd of them splashing around in the water with their trunks held high like flexible periscopes. It was a magical experience! Our next stop on our Borneo tour was the rainforest reserve of Tabin, which is one of the richest in Sabah in terms of wildlife and birds. It is a beautiful location where “orphaned” orangutans — those who have lost their mothers to poaching and fires, are eventually rehabilitated. These orphans are first sent to a rescue centre near the city of Sandakan where they are nursed back to health by volunteers. After they are deemed ready for rehabilitation, they are transported back to the forests of Tabin to live out their lives in the wild. Other wildlife in these forests include vine swinging gibbons, playful river otters, the elusive and endangered Sumatran Rhinoceros, Banteng (wild cattle), the Beaded Pig, troops of Pig-tailed or Long-tailed Macaques, and nocturnal delights such as the Common Palm Civet, Leopard Cats, Thick-spined Porcupine, Small-toothed Palm Civet and Banded Palm Civet. The next stop and last part of our Borneo tour was in one of the last patches of true primary forest left on the island: The Danum Valley Conservation Area. Here, one can walk along elevated pathways and canopy bridges through some of the most magnificent jungle I have ever seen. Huge trees, covered in mosses, orchids and ferns, soar into the sky; forest streams meander through valleys filled with dense vegetation, and tropical birds of the most startling colours flit between the branches. We saw big beautiful hornbills, a plethora of monkeys, lovely tree frogs and even a fleeting glance of the rare clouded leopard. During a lunch break at the lodge, we noticed that all the diners had abandoned their tables and had gathered at the front of the open-air restaurant and were peering up into the trees. Curious, I joined them, only to be greeted by the wonderful sight of a big shaggy orangutan slowly moving through the canopy, just metres above our heads. She too was having her lunch and was stuffing her mouth with handfuls of fruit. And then, to the delight of the assembled crowd (myself included), a little tiny head poked out from beneath her bushy pelt. She was carrying a gorgeous little baby, a sight which gave me hope for the future of this critically endangered gem of the forest.

The conservation area boasts a hill where one can view the seemingly, never ending lowland rainforest of Danum Valley and one early morning before the sun rose, we made our way up to catch the rays as they spread over the valley. As the sun began to rise from the horizon, the mist among the trees turned into a hue of pink and seemed to blanket the rainforest below us, with only the top of the trees being able to peek out. This was a spectacular affair, and left us with a pristine feel of this ancient rainforest. If you’ve always longed to experience a real equatorial rainforest, Borneo will fulfil your wildest dreams. The jungles conjure up remoteness and adventure, as well as peculiar mammals and colourful birds and it will leave you breathless with the beauty that your eyes will behold! 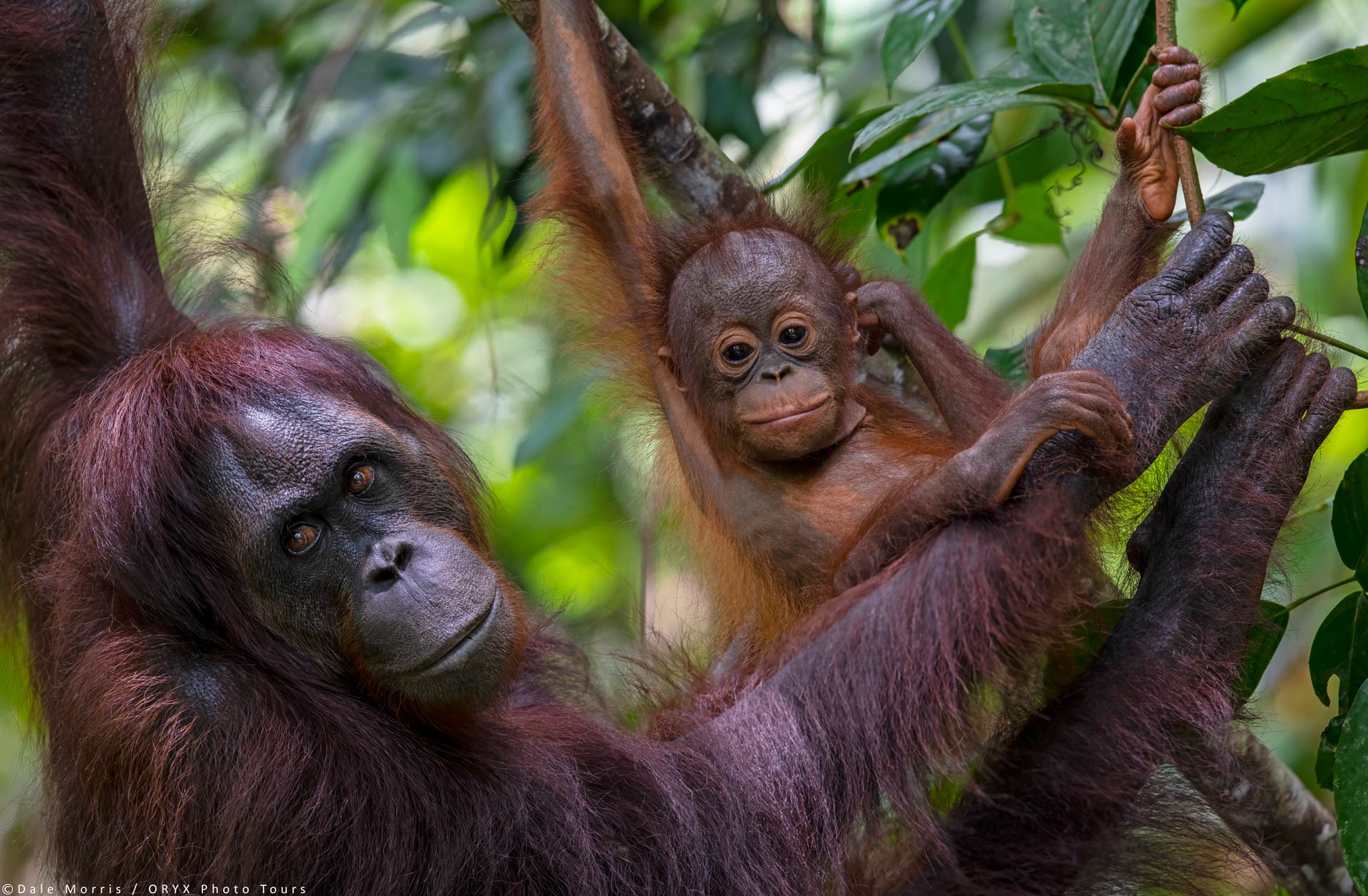 Waiting, Stalking, and Running From an Orangutan on a Borneo Photography Tour