Discussing envisaged photographic subjects and how to photograph them

Learning to use light

Composition – classic rule of thirds, and when to break the rules

Simply put, Ethiopia is undoubtedly one of Africa’s most productive and rewarding photographic destinations, with awe-inspiring scenery, photogenic and approachable birds and mammals, plus some striking ancient buildings and cultures making this a photographer’s dream! With endemic plant species, mammals & avi fauna, the Simien & Bale Mountains combination offers a chance to capture the natural wonders of Ethiopia.

Capture the breath-taking Afro-alpine landscape found in the Bale and Simien Mountains and its endless terrain of escarpments, moors, lakes and mountain streams.

Our photo tour takes place during the dry season after the rains have dissipated and left behind a lush green topography, perfectly complimenting photographic opportunities.

Photograph the world’s most endangered canid, the Ethiopian Wolf and witness hundreds of Gelada Baboons in close proximity. Other treasures in these regions include the huge Mountain Nyala, head-butting Walia Ibex, the Bearded Vulture, Tawny Eagle, Thick-billed Raven. Today is set as an arrival day for our Ethiopian photo safari, where we will overnight in Addis Ababa.
2

Our main photographic target here will be the plateau’s most celebrated resident, the Ethiopian or Simien Wolf, crowned with the unfortunate title of “the world’s rarest canid.” This is an area of high-altitude plateau that is broken by numerous spectacular volcanic plugs and peaks, beautiful alpine lakes and rushing mountain streams that descend into deep rocky gorges on their way to the lowlands below. The Bale Mountains contains three distinct eco-regions: the northern plains, bush and woods; the central Sanetti Plateau, with an average elevation of over 4000 metres; and the southern Harenna Forest, known for its mammals, amphibians and birds including many endemic species.
4

The next three days will be spent exploring and photographing the legendary Simien Mountains and its unique inhabitants. The spectacular highlands are a haven for endemic and endangered species and our photographic targets here are without a doubt the magnificent Walia Ibex and incredible Gelada Baboon.
7 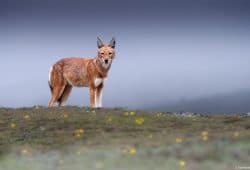 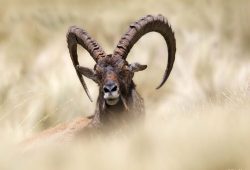